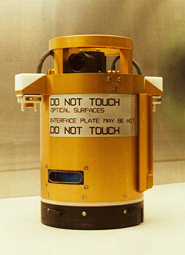 Development of thermal regulation for a research system in the MIR space station.
Role: Developer, system engineering
Client: University of Amsterdam from 1991 until 1993
The Alice project was used for long duration studies of critical gasses in the Russian MIR space station. I was responsible for the realtime software design and development of the thermal system. I wrote the software in assembly language (for 8051 family microcontrollers).

As an interesting side note: this microcontroller is what you generally find in keyboards and it costs about 1$. In the 1990's this was one of the few available radiation-hardened microcontrollers (this one actually costs a lot more than 1$, but has the same performance).

I managed to cram a 9 channel 32 bit temperature control system, 7 digitally filtered 32 bit sensor channels and experiment timeline controller into this system, with a staggering 32 kB of memory, where 128 bytes where of the fast kind :-) Just shows what you can do with assembly language programming.

Alice flew without any interaction for months in the MIR. This software had to work perfectly, otherwise the scientist would receive a whole lot of nothing after several months of waiting for the experiment results. Well it did work perfectly and I'm very proud of having written it.