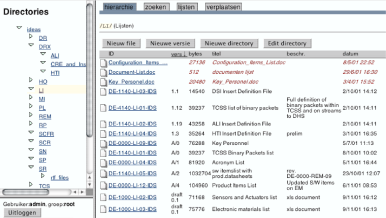 Design and implementation of a web application for the management of large amounts of documentation
Role: System Design/Development
Client: University of Amsterdam from April 2000 until November 2001
For aerospace projects a careful management of documents and document versions is a requirement, and the DMS is an intranet web application that took care of this.

It provided all users with a well-organized overview of the complete project documentation.

Integral parts of the DMS were version control and mandatory document numbering according to the Product Assurance rules of the project.

I built this software while working on Declic because we needed something like this for the project, and it didn't exist, except at astronomical prices.